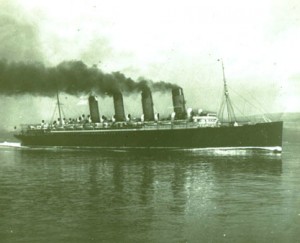 RMS Mauretania at speed on her Sea Trials – how she would like to be remembered.

By the start of the 20th century British dominance of the Atlantic Passenger Trade had been lost to Germany and America.  Cunard the British flag bearer in the trade had concentrated on smaller slower more efficient ships, but that policy was loosing out to competitors’ speed and luxury.  So it was in 1901 Cunard began discussing building two new fast steamers, they entered into an agreement with the British Government for a cheap loan in exchange for building the ships to be capable of conversion to warships in case of need.  Originally designed to be driven by reciprocating steam power, Charles Parsons who was on the Design Committee and was the inventor of the marine steam turbine persuaded the Admiralty and Cunard they should be turbine driven.  They were in fact the only ships of any size and speed to be driven by directly coupled turbines, future ships would have their screws driven by the turbines through reduction gearboxes, but these had not been developed sufficiently for these ships.  One of the ships the Lusitania would be built on the Clyde in Glasgow, however George Bernard Hunter of Swan Hunter was determined that his company would build the other on the Tyne.  To this end he drove through an amalgamation between his company Swan Hunter Ltd, Wigham Richardson and Co Ltd and Wallsend Slipway and Engineering Co. The new company which would be Swan Hunter and Wigham Richardson Ltd was formed in February 1903.  George Albert Hunter the draughtsman moved into the new business rising gradually through the ranks of the Technical Staff forming at the same time a close friendship with Harry Bocler, the man who would be Technical Manager of the new firm. 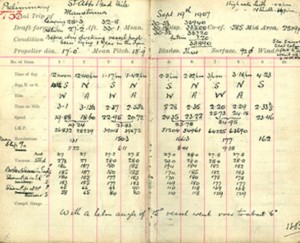 Harry Bocler was Godfather to George Albert’s son William Wilson (Billy) Hunter when he was born in June 1901.  Harry kept in touch and supported Billy throughout the rest of his life, I remember receiving regular Christmas and Birthday presents as one of Billy’s sons.

The Mauretania, as the Clyde ship was called, was officially ordered in May 1905 (which was long after work had started on the ship), was launched on 20 September 1906 and left the Tyne on her preliminary trials on 17 September 1907.  She finally left Liverpool on her maiden voyage to New York on 16 November 1907.  The Mauretania and her sister the Lusitania were unrivalled on the Atlantic run, with the Mauretania holding the “Blue Riband” for the fastest crossings in both directions for over 20 years.  In accordance with the Governments loan agreement the Mauretania was requisitioned by the Admiralty on the outbreak of WW1, and she saw service as a troop carrier and hospital ship during the Gallipoli campaign and finally she made seven trips across the Atlantic ferrying American Troops to Europe during 1918. (And after the war ended she ferried many thousands of these troops home again!) 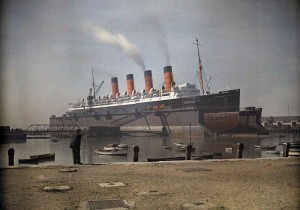 Mauretania in dock at Southampton in 1928

Meanwhile George Albert’s career had prospered along with his favourite ship and he quickly became Chief Draughtsman with Swan Hunter.  He was rewarded for his services to the war effort in 1918 by being amongst those who were the first to be made Officers of the Order of the British Empire (the OBE).  He continued to work as Chief Draughtsman until he was forced into retirement through ill health aged 62 in 1934.  Coincidentally this was also the year that the Mauretania was retired from the Atlantic Run making her last run at an average speed of over 24 knots.  In July 1935 the Mauretania made a last nostalgic courtesy call on the Tyne on her way to the breakers yard at Rosyth on the Forth.  George Albert was there to meet her on the Tyne and to take his final photographs. He died on 5 March 1836 of Carcinoma of the rectum. 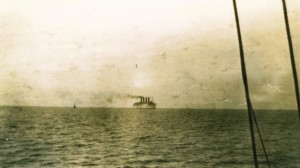 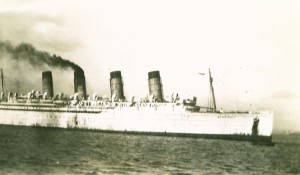 Rust streaking the sides of of the venerable Mauretania in 1935