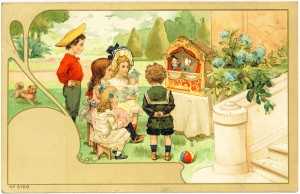 William Wilson (Billy) Hunter was born on 5 June 1901 in Bishopwearmoth, Co Durham to George Albert Hunter and Dorothy Ann Small.  George and Dot were both natives of Sunderland and had married the previous August shortly after George had taken a job with Swan Hunter & Wigham Richardson in Newcastle upon Tyne as a Navel Architect and Draughtsman.  Shortly after Billy was born they moved to Heaton on Tyne to be closer to George’s work.  Both the Hunter and Small Families were large and close, George had six siblings still alive and Dorothy eight siblings and step siblings.  Two of the closest were William Hunter and Ethel DixonSmall who themselves married in July 1903.

Billy frequently told the story of how he was shared between the two couples until William and Ethel started their own family in 1906.  This is supported by a postcard that has survived the hundred and ten years since then: 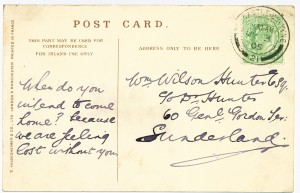