In December 1819 the Vicar of Hemyock in Devon wrote to the Prime Minister:

Should the subject I am about to mention not come under your Lordship’s cir*****ference I have to apologise for intruding on your time, but this Parish is at present so burdened with poor that any addition is of course a matter of moment. James THOMAS, a Greenwich Pensioner, has I am informed ingaged to sail with George SOUTHEY of the Parish of Wellington, Somerset to the Cape of Good Hope and has left a wife and five young children chargeable to this Parish. I should therefore feel obliged by your Lordship’s informing me if steps cannot be taken to prevent him leaving England. Again allow me to apologise for intruding on your Lordship’s time and I have the honour to remain my Lord

The matter must have been satisfactorily resolved, because James, his wife Mary (Lasky) and children Eliza, Jane, Humphrey, Ann, Isaiah and Arabella sailed with George Southey on the Kennersley Castle from Bristol on 10 Jan 1820 for South Africa.

There was an outbreak of Measles on the ship during the journey and at least seventeen of the children on the ship died, including Ann Thomas aged 4.

James Thomas, who was Great Great-uncle to Eva Hunter, and his wife went on to have four more children in South Africa, before James was killed in a native African uprising in 1829.

George Southey, who led this party to South Africa, was a cousin to Robert Southey the Romantic Poet. Around about the same time as the journey to South Africa was taking place Robert wrote the poem “His Books” which I quote in part below, it expresses my view of genealogy. 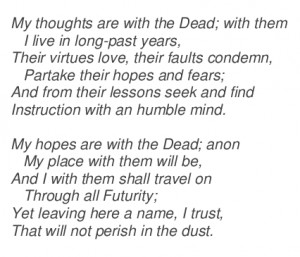