The bloodiest battle on English soil ever:

Just to the east of Leeds in West Yorkshire is the small village of Towton.  This village sprang to fame on 29 March 1461 with what has been described as the bloodiest battle ever fought on English soil.

Lead up to the battle: Two rival Kings

Midway through one of the many English civil wars, the Wars of the Roses, the Lancastrian King Henry VI had been on the throne for 39 years.  Henry had succeeded his father Henry V (famous for his victories over the French at Agincourt and elsewhere) when he was aged only nine months old, unfortunately he grew up to be an ineffective ruler, was a peaceful and also frequently insane.  The ineffective rule lead to rival factions of the nobility squabbling amongst them selves two factions where that led by Richard of York  and Edmund Beaufort Duke of Somerset.  Both these magnates had claims to succession to the throne of the still childless King. In 1460 after the defeat of Somerset at the Battle of St Albans and of the King at the Battle of Northampton, parliament passed an “Act of Accord” which allowed Henry to remain King but made York Lord Protector and named York as Henry’s heir in preference to Henry’s infant son,

The Powerless and frightened King was forced to agree, however his queen, Margaret of Anjou, being of sterner stuff was not happy with the King’s and her son  being passed over.  She fled first to Wales and then to Scotland, rallying her supporters along the way.  (She was given support by Scottish Queen and Regent Mary of Guelders, in exchange for Berwick on Tweed).

York marched north to counter this threat and met with the Lancastrians at the Battle of Wakefield.  The Yorkist army was surrounded and destroyed, The Duke of York was killed along with his son Rutland and Salisbury’s son and son-in-law.  Salisbury was captured the next day and also killed.

The victorious Lancastrians marched south defeating the remains of the Yorkists under Warwick at the Second Battle of St Albans but failed to gain access to London.

The mantle of the York claim now fell on York’s eldest son Edward, Earl of March.  After winning a battle at Mortimer’s Cross on the welsh border, he marched to London and joined with the remnants of Warwick’s forces and was proclaimed King Edward IV.

There were now two rival “Kings” of England. 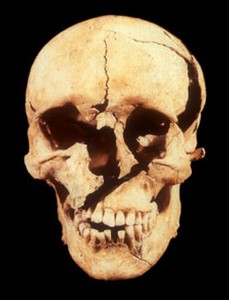 Skull from a victim of the Lancastrian massacre following their defeat at the Battle of Towton, showing sword slash across the front of the face.

The Yorkists now marched North to attempt to remove the Lancastrians from York.  After a skirmish as they crossed the River Aire at Ferrybridge, the Yorkists camped overnight at Sherburn-in-Elmet.  The Lancastrians Marched to Tadcaster and made camp there.

The Battle of Towton

Dawn broke the next day to dark clouds and strong winds and although it was Palm Sunday, the two armies prepared for battle. Contemporary sources claim the armies were huge, up to 200,000 in the Yorkist Army and even more in the Lancastrian though modern estimates put the combined figure at about 50,000.  Three quarters of the English peerage were present at the battle.

The Lancastrians under Somerset moved into a good position defending the route to York and with Towton Dale as a “defensive ditch” in front, and their flanks protected by marsh. The Yorkists were the smaller army and were still waiting for troops under Norfolk to arrive.  A critical point however was that the Lancastrian position did not allow them to take advantage of their superior numbers.  With superior numbers the Lancastrians were content to let the enemy come to them, so the opening move was made by the Yorkists.  Their bowmen took advantage of the strength of the wind which gave their arrows greater range, and unleashed both their own arrows and the salvaged arrows of their enemy into the thick of the Lancastrian force.  The Lancastrian’s only response could only be to abandon their well defended position and close with the Yorkists.  The Lancastrians with more and fresher men forces the Yorkists to gradually retreat up the slope.  Fighting continue for three hours, till Norfolk’s force arrived and attacked the Lancastrian left flank.  The Lancastrian line broke and men began fleeing for their lives.  The land to the north of the battle is still known as Bloody Meadow after the slaughter of the fleeing soldiers. Contemporary sources suggest between 28,000 and 38,000 casualties, a more realistic figure might be around 9,000.  However the Lancastrian nobility and power-base was destroyed with large numbers of their nobility killed (whilst the Yorkists only lost one noble in the battle)